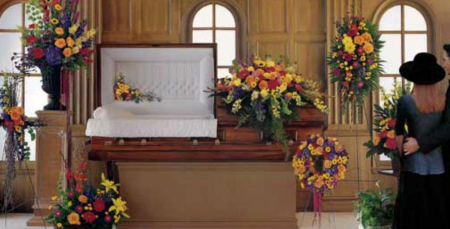 Fr John Ryan writes about Tony Campolo, the Baptist Minister and one time spiritual adviser to President Clinton, telling the story of paying his respects at the wrong funeral.

Here is another story from Tony Campolo, the Baptist Minister and one time spiritual adviser to President Clinton.

One day his mother phoned to tell him that Mrs Kirkpatrick had died. Mrs Kirkpatrick had played a very significant part in Tony's childhood and Mrs Campolo was correct in suggesting that Tony would want to go to the funeral even though it was not at all convenient at the time.

He arrived at the funeral home still struggling to attach his tie just as the funeral was scheduled to begin. There were several funerals in progress at the time.

So hurriedly had he entered the room that he failed to notice that other than an elderly woman sitting two seats away from him there was no one else in the entire room.

Let him take up the story in his own words.

‘I looked over the edge of the casket; and the man in the casket did not look at all like Mrs Kirkpatrick.  I had the wrong funeral.

‘I was just about to leave when the woman reached over and grabbed me by the arm. With desperation and pain in her voice she said, "You were his friend, weren't you?” What was I to do? Where was the call of the Spirit for me?

Clearly this poor woman was reaching out for assurance that somebody had some connection with her husband and some concern for her. Was I to say, "I'm sorry, I'm at the wrong funeral. Your husband obviously didn't have any friends."

‘No, she needed to know that there was somebody to whom her husband meant something. So I let her think that I knew him and thought well of him. Indeed I lied. I continued through the funeral sitting at her side. Afterwards the two of us went out and got into the only car that would follow the hearse to the cemetery. I figured I might as well go all the way.

‘We stood together at the edge of the grave and said some prayers. As the casket was lowered, each of us threw a flower onto it.

‘We got back into the car and returned to the funeral home. As we arrived I took the elderly woman's hand and said to her: “Mrs King, “(I now knew her name), “I have to tell you something. I really did not know your husband but now I want to be your friend and that won't be possible unless I tell you the truth. I came to this funeral by mistake.”

‘She took a long time to respond. Then she placed her other hand on top of mine and said; “You'll never, ever know how much you’re being with me meant to me today.”

‘I know there will be those who distance themselves from me for what I did, the lie I acted out, the funeral of Mrs Kirkpatrick I passed up; and I can understand that.

‘However at the end of that day, I had a feeling that there was a voice within me speaking to me and above all else saying; 'Well done, thou good and faithful servant".’

Fr John Ryan, a Sandhurst Diocese priest who lives in Canberra, has spent much of his 49 years of ministry working in renewal projects, especially with priests.