Mob tailor made to measure for Rylance 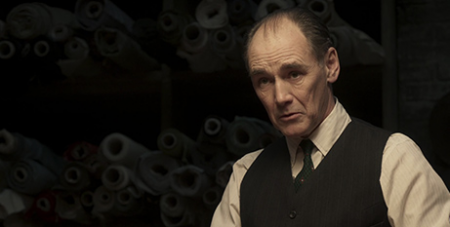 In The Outfit, a tailor must outwit a dangerous group of mobsters in order to survive a fateful night. Source: Jesuit Media.

What’s in a name? The word "outfit" may refer to what one is wearing. Gangster films have taught us to think of mob organisations when we hear the word. Both meanings are relevant here.

While The Oufit is set in 1950s Chicago, it is a British film, filmed in London studio on a single set, the interior of a tailoring shop, with some glimpsing shots outside the store in the snow. The cast is principally British plus two American actors.

Mark Rylance is Leo Burling, meek and reticent, who insists to those who refer to him as a tailor that he was a “cutter”, making the top-class suits by hand. In fact, he does the voice-over and begins by explaining to us the various steps of choosing fabrics, measuring, cutting, sewing, producing his work. His assistant is the strong-minded Mabel (Deutch).

As Leo delivers his commentary, a range of people come in to deposit envelopes of money, checked on by the brash son of the local mob boss, Richie (O’Brien), always accompanied by his protector, Francis (Flynn).

The action takes place overnight. Francis and Richie return to the shop as Richie has been wounded following an ambush from other gangsters. Leo is forced to sew him up. However, there is a confrontation between Richie and Francis and a jolting twist to the plot.

We know that Leo is shrewd but we perhaps did not realise how shrewd in his handling of the consequent situation. At the centre of all the intrigue is a tape-recording, with and somebody in the gang feeding the information to the FBI.

While The Outfit will not appeal to those who are eager for fast-paced action, it is of great interest to an adult audience that values plot, complexities and character.