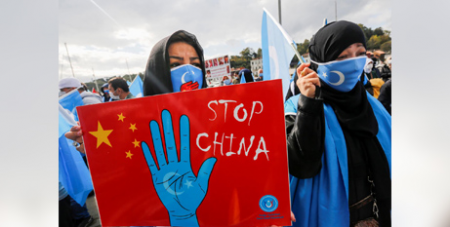 A new United Nations report on modern slavery provides further documentation of China’s mistreatment of the Uyghur ethnic group, a Muslim minority that according to some human rights groups is suffering genocide. Source: CNS.

The UN’s Special Rapporteur on contemporary forms of slavery, Tomoya Obokata, wrote that it is “reasonable to conclude” that forced labour among ethnic minorities, including the Uyghurs, “in sectors such as agriculture and manufacturing has been occurring in the Xinjiang Uighur Autonomous Region of China”.

Dr Obokata identified two state-mandated systems that have contributed to the forced labour of the Uyghurs – one system detains minorities and subjects them to work placements, while the other shifts rural labourers into other forms of low-skilled, low-paid work.

While the Chinese government claims that the programs provide work opportunities for minorities, the report found that “indicators of forced labour pointing to the involuntary nature of work rendered by affected communities have been present in many cases”.

“Further, given the nature and extent of powers exercised over affected workers during forced labour, including excessive surveillance, abusive living and working conditions, restriction of movement through internment, threats, physical and/or sexual violence and other inhuman or degrading treatment, some instances may amount to enslavement as a crime against humanity, meriting a further independent analysis,” the report reads.

In recent years, Uyghurs — with estimates of their number ranging as high as 1.8 million — have been detained in hundreds of “re-education camps”.

The Vatican has remained largely silent on the persecution of the Uyghurs, though Pope Francis did describe the Uyghurs as a persecuted people in a book published in 2021.