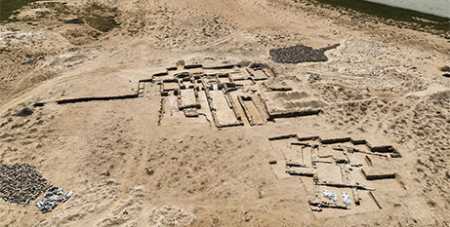 A Christian monastery, possibly dating to the years before Islam spread across the Arabian Peninsula, has been discovered on an island off the coast of the United Arab Emirates, officials announced yesterday. Source: Crux.

The monastery on Siniyah Island, part of the sand-dune sheikdom of Umm al-Quwain, sheds new light on the history of early Christianity along the shores of the Persian Gulf. It marks the second such monastery found in the Emirates, dating back as many as 1400 years – long before its desert expanses gave birth to a thriving oil industry that led to a unified nation home and the high-rise towers of Abu Dhabi and Dubai.

The two monasteries became lost to history in the sands of time as scholars believe Christians slowly converted to Islam as that faith grew more prevalent in the region.

Today, Christians remain a minority across the wider Middle East.

For Timothy Power, an associate professor of archaeology at the United Arab Emirates University who helped investigate the newly discovered monastery, the UAE today is a “melting pot of nations”.

“The fact that something similar was happening here a 1000 years ago is really remarkable and this is a story that deserves to be told,” he said.

Carbon dating of samples found in the monastery’s foundation date between 534 and 656. Islam’s Prophet Muhammad was born around 570 and died in 632 after conquering Mecca in present-day Saudi Arabia.