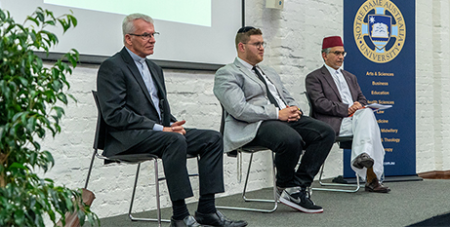 The idea that people of faith have a shared responsibility to protect “our common home” was the theme of this year’s Abraham Day event hosted by the University of Notre Dame Australia in Fremantle. Source: The eRecord.

The interfaith event last week brought together leaders of Western Australia’s Muslim, Jewish and Christian communities – which all share a common origin in Abraham – to focus on issues that unite them and strengthen the bonds of friendship.

During the panel discussion, Perth Archbishop Timothy Costelloe SDB spoke of the story of Genesis and how people we are created in the likeness of God to be “stewards of the world”.

“At the end, the way the story presents itself, it has as the culmination of God’s creative activity, the creation of humanity,” Archbishop Costelloe said.

“My experience of teaching primary school children, is that, if you share this particular story with them, and then you say to them, ‘What sort of God is being talked about?’ they’ll say something like, ‘Well it’s a God who makes stuff.’

“We would put it in a slightly more sophisticated way, but ultimately, those young people would be right. We have a kind of a litany or a poem, which speaks very powerfully as God as a creating God, as a life-giving God. That’s important to keep in mind.”

“Because after God created everything else in this first creation story, He creates humanity. And it says, God created humankind in the divine image and likeness.”

Perth Hebrew Congregation Chief Rabbi Daniel Lieberman built upon Archbishop Costelloe’s comments, discussing the psalms that praise God for the wonder of creation, and how all religious followers were encouraged to act as “caretakers” of the planet.

Islamic community of Perth teacher and leader Sheikh Muhammed Agherdien highlighted the Quran’s passages that urge humans to take care of the environment.

Archbishop Costelloe: We are created in the image of the Life Giver, and the creator. (By Jamie O'Brien, The eRecord)