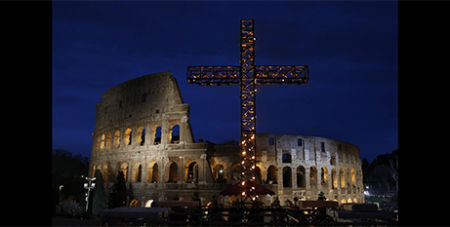 Pope Francis will join other religious leaders at a prayer service for peace at Rome’s Colosseum later this month, the Vatican confirmed. Source: CNA

The October 25 prayer meeting is part of a three-day interreligious summit called “The Cry for Peace,” organised by the Community of Sant’Egidio.

Sant’Egidio has held an international conference about peace every year since 1986, when Pope John Paul II convened the first World Day of Prayer for Peace in Assisi, Italy.

The Catholic community of Sant’Egidio announced last month that Rome would be the location of this year’s meeting October 23–25.

The conference’s final event will be an interreligious prayer service at the Colosseum. The famous monument is believed by some historians to be a site of early Christian martyrdom.

Representatives of the world’s major religions will take part in the prayer service and conference, which will include discussions on “an architecture of dialogue that protects and affirms peace, always and in every context”, according to the Sant’Egidio website.

Pope Francis to join interfaith prayer for peace at Colosseum in Rome (By Hannah Brockhaus, CNA)