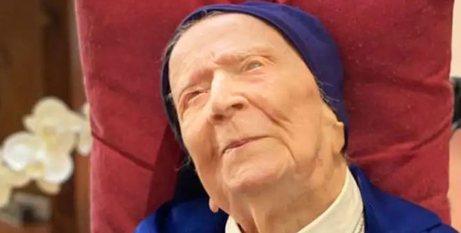 Sister Andre Randon, a French nun and the oldest person in the world, has died at the age of 118. Source: CNA.

Sr Andre became the world’s oldest person on April 19, 2022, when Kane Tanaka of Japan died at the age of 119, according to the Gerontology Research Group.

“There is great sadness but … it was her desire to join her beloved brother. For her, it’s a liberation,” David Tavella of the Sainte-Catherine-Laboure nursing home said.

Born Lucile Randon on February 11, 1904, in Alés, France, she converted from Protestantism to Catholicism when she was 19. She served young children and the elderly at a French hospital until she became a nun at the age of 40. She joined the Daughters of Charity — founded by St Vincent de Paul — in 1944. She took the name Sister Andre in honour of her deceased brother.

Seventy-six years later, Sister Andre moved to Toulon, in southern France, where she resided in the Sainte Catherine Labouré retirement home. It was there that she passed away.

In 2021 she tested positive for COVID-19. She was isolated from the other residents but displayed no symptoms.

For her 115th birthday in 2019, Sister Andre received a card and a blessed rosary from Pope Francis, which she used every day.

When she turned 116 in 2020, the Vincentian nun shared her “recipe for a happy life” — prayer and a cup of hot cocoa every day.

According to the Gerontology Research Group, the world’s oldest person is now Maria Branyas Morera, age 115, a resident of Spain.

University contributes more than $250m in benefits to local community