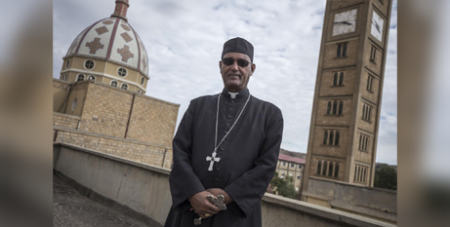 Marking 700 days of war in Ethiopia’s region of Tigray, a local Catholic bishop restated his call to the local and international community to save millions of people. Source: CNS.

People must “exercise their moral duty (to) be a voice of the voiceless and enforce international treaties to save more than 7 million live from vanishing,” Bishop Tesfasellassie Medhin of Adigrat said in a statement on October 4.

Fighting began again on August 24, shattering a five-month humanitarian truce the Ethiopian Government announced in May to allow aid to reach millions of needy people. During the period some food, medicines and other basic needs reached the region.

Bishop Medhin said the Church in Tigray was urging all the Catholic networks, partners, national and international religious leaders, United Nations agencies, the international community, among others, to condemn the war and move to help the suffering populations.

“It is very painful and shocking to see horrifying … indiscriminate … shelling and bombardment of civilians. As a result, all lifesaving humanitarian operations are totally halted across Tigray,” he said.

“It extremely difficult to move across the rural areas to see what is happening, because there is no fuel,” he said.

When the war started in November 2020, the Government put the region under a blockade and cut off basic services, including telecommunication, banking, transport, water and medical care.

The blockade is still in place in the region as the Tigray People’s Liberation Front battles a coalition of armies in a total media blackout. Some analysts have described the fighting as a “world war in Africa”.

Ethiopian bishop urges action to save millions in renewed war in Tigray (By Fredrick Nzwili, CNS)