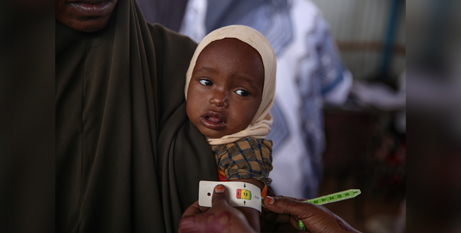 Caritas Australia has called on the Albanese Government to honour its pre-election promises by increasing foreign aid in tomorrow’s federal Budget.

“This budget is coming at an incredibly crucial time. Countries like Somalia are teetering on the brink of famine right now, and the lives of many are quite literally hanging in the balance until the international community responds with substantial and immediate lifesaving aid,” said Damian Spruce, Caritas Australia’s advocacy associate director.

An estimated 7.8 million people in Somalia are facing severe food shortages, with the lives of hundreds of thousands of people at immediate risk.

“Support next year is too late. Right now, in some parts of Somalia, one in three children under the age of five is close to dying of hunger,” Mr Spruce said.

“We cannot wait until this hunger crisis is officially declared as a famine, because countless lives will be lost before then.

“We urge the Labor Government to commit to immediate famine relief to prevent this catastrophe.”

Caritas Australia joins the peak body for international development, ACFID, and other Australian development NGOs in calling for a new and additional commitment of $150 million for immediate famine relief, and a further $200 million on global food security measures.

In addition, Caritas Australia joins other organisations in calling for $705 million over four years to go towards climate resilience and gender equality through the Kioa Climate Emergency Declaration 2022. The declaration calls on the Government and the international community to take urgent and effective climate action to save small island communities on the front line of the climate crisis.